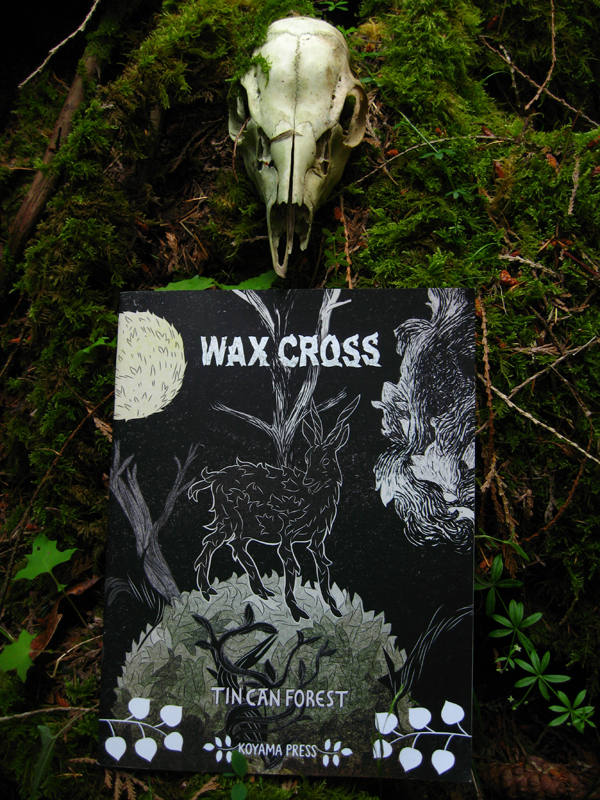 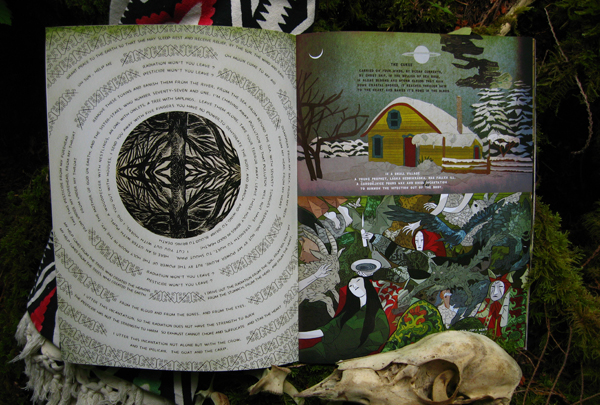 REVIEWS
Publication: THE COMICS JOURNAL
Tin Can Forest’s (aka Pat Shewchuk and Marek Colek) Wax Cross is a far more difficult comic to parse. There is no question, however, that this fable is astonishingly beautiful and visually exciting in a different way in each of its twelve two-page chapters. It’s a classic fairy tale journey across time, place and concepts, reaching deep into the past with its tropes of witches and monsters but touching on the present and future with its references to electricity, technology, devastation, pollution and ruin. Visually, the chapters’ styles range from photorealism to children’s book illustrations to mimicked stained glass and various points in-between. The colors are rich but muted, as though the book was being viewed on an ancient newsreel or perhaps was found as an ancient artifact. The look of the book is actually a bit on the Fauvist side, with a preponderance of sharp lines containing the widely varied color schemes. The sixth chapter contains some of those photorealist images, except they mimic old, washed-out photos, or perhaps the strange light one sees during twilight, reminiscent of certain Al Columbia comics. The eleventh chapter is notable because it’s entirely devoid of color, as this chapter about death takes place in a dreamy, wintry world. Wax Cross feels as much like an incantation as a narrative; it’s a looping, recursive journey that begins with a prayer against the ills of the post-apocalyptic world (radiation, disease, poison) that seems to be as much for the reader as it is for its narrator-protagonist. It’s a book that rewards multiple readings.

Publication: COMIX CUBE
Eastern European art has a particular lilt to it, doesn’t it? What I have in my hands is a giant comic book constructed primarily out of triangles. As angular as the figurative work is, Tin Can Forest have a subtle manner of rounding off those triangular forms to literally take the edge off of what is constructed as a harsh visual code. The softer corners and counterbalancing curved and swooped shapes give /Wax Cross/ a graphical freedom that most angular art lacks ….click to continue

Publication: SQUIDFACE & THE MEDDLER
A first reading of Wax Cross by Tin Can Forest feels like trying to reconstruct a very long series of dreams upon waking. What comes through first is the visual: beautifully dark and dancing images populated by witches, werewolves, farmers, demons, priests, and one very sinister goat. You almost need to get past how beautiful the art is to focus on what’s going on ….click to continue